Who was the 29th President of the USA?

The 29th president of the United States America was Warren Gamaliel Harding. The man who was the first sitting senator to become the president of the USA. He enjoyed this post from 1921 until his death in 1923. Warren was born on 2nd November 1865 in Ohio, USA. Moreover, he was one of the most popular presidents at that time. However, historically he is ranked one of the worst presidents. After his death, many scandals of him, as well as his extramarital affairs, came into light. Moreover, he was a member of the Republican Party. Here, I am going to tell about Warren Harding briefly. However, for full details, you can click here.

Harding spent all his early life in rural Ohio. However, politics brought him to other places and cities. Moreover, during his early age, he bought Marion Star, a newspaper. And his hard work and dedication made it a successful newspaper soon. Besides this, he also started taking part in political activities. As a result, in 1899, he secured a seat in Ohio State Senate. Harding spent there four years and later become lieutenant governor. He continued his political career and efforts, also took part in the election of Governor in 1910. However, he could not win that election. But, in 1914, he won a seat in the senate of the United States.

Harding worked as a senator for six years and in 1920, he ran for the Republican nomination for the president. Moreover, there were no chances for him until the convention started. The leading candidate for the presidency could not get the majority, hence convention deadlocked. Meanwhile, Warren’s support gradually grew and in 10th ballot, he got the nomination.

The election for the President

Warren G Harding started a front porch campaign for the election. He mostly stayed in his hometown and let the people come to him. Moreover, he claimed that he would bring the normalcy of pre-World War I in the USA. As a result, it brought people closer to him and thus won the election. He defeated Democrat James Cox and Socialist Eugene Debs to become the 29th president of the USA.

After winning the election, he included well-regarded and well-educated people in his cabinet. Moreover, his biggest achievement came with the Washington Naval Conference of 1921-22. All the Naval powers of the world agreed to a Naval limitation programme which lasted for a decade. Harding died of a heart attack on 2nd August 1923.

To know more about such people, visit here. 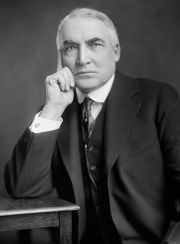