Who is Adam Gary Sevani?

Adam Gary Sevani is a young American dancer and actor. He is most famous for playing the role of Robert Alexander III/Moose in the Step up film series. Moreover, Sevani was born on 29th June 1992 in Los Angeles, California, USA. Living in Los Angeles the home of Hollywood has helped him a lot to pursue his career. Let’s have a brief look at his early life and career. However, to read full details about him, visit here.

Adam Manucharian started his career with The Emperor’s Club playing the role of a student in 2002. However, he got fame and came into limelight in 2008. He appeared in the second episode of Step-Up Series. The dance drama film Step Up2; The street by Touchstone pictures was a career turning point for him. The Step Up Moose actor played the role of Rober Moose Alexander III in the film and earned appreciation. The critics like The New York Times also lauded him and because of his character declared him “Perhaps the worst nerd in history of the movie.

Moreover, his movie grossed over $150 million worldwide and also get a role in the third instalment. The producers made Step Up3 with a budget of $30 million. However, his performance once again grossed over $159 million and earned praises.

The peak point of his career came in 2010 when he starred alongside Miley Cyrus, Demi Moore and Ashley Greene. He appeared along with other celebrities in the remake of French film LOL. However, this film could not get enough success and earned bad reviews.

Adam has worked in many movies and has got appreciation across the world. The list of his movies is as below, 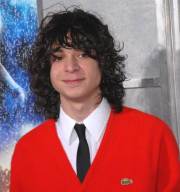