Who are Anne Shirley & Amybeth Mcnulty?

Annie Shirley is a fictional character which introduced Lucy Maud Montgomery in her novel. Moreover, Lucy introduced this in her novel Anne of Green Gables in 1908. Lucy also told that she got the idea of Anne’s story from her relatives. Further, she said that her relative planned to adopt a boy from the orphanage but received a girl. Hence there is no real existence of Shirley. However, Lucy clipped a photo from a magazine and considered it Anne Shirley. Moreover, she did not know the name of the model whose photo she clipped.

While Amybeth Mcnulty is an Irish-Canadian actress. She got fame because of Anne Shirley character she played in a drama series Anne With An E. The 18 years old actress who born on 7 November 2001 grabbed immense praises worldwide. Moreover, her character Anne Shirley earned her Canadian Screen Awards in 2018 and ACTRA Toronto Awards in 2019.

Fictional life of Anne was not so happy. Moreover, there is no specific date of her birthday, however, later Lucy suggested her birth was in March 1865. Anne’s parents died when she was a three-month infant. Therefore, she found herself in an orphanage. Mrs Thomas took her from Orphanage and did her Shirley’s housework but she also died. Then Hammond family took her with them. But they used to treat her like a servant. Some years later Mr Hammond also died and once again Anne found herself in an orphanage.

However, when she was eleven years old, Matthew and Marilla took her with them to Prince Edward Island. Unfortunately, she arrived here by mistake Because the family wanted to adopt a boy. However, she spent her later life here and got her education. After graduating, Anne joined queen to get training for teaching with his friend Gilbert. Anne also married Gilbert later and lived a happy life.

Well, Anne’s character for Amybeth was a turning point for her career. When she played this role, she was just 16 years old. But she involved herself completely in Anne and got praises worldwide. Moreover, she got two major awards at the age of 17. 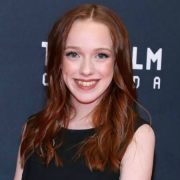