Dembele Barcelona deal has entered into his final phase. The reason behind this is the lack of availability of the player. So, before exploring that let’s discuss who is Dembele. Masour Ousmane Dembele is a professional football player of France. Also, he plays as a forward for the La Liga side Barcelona. Dembele, born on 15 May 1997, has great abilities to use both his feet. Moreover, he has the agility to beat the defender with great ease. Therefore, he plays at either wing. To read complete details about him, click here.

Dembele, born in Normandy started playing football at the age of 12. Moreover, his mother is French of Mauritanian while father is from Mauritania. He took his first footballing step in Evreux FC 27. However, the major breakthrough for him came in 2016. He joined Dortmund and won the DFB-Pokal with die Borussen in 2016-17.

However, before that, in 2014, he had debuted at senior level for Rennes. He played  Championnat de France Amateur and assisted for a goal in his very first match. Overall in his first season, he scored 13 goals in 18 games including a hat-trick. His outstanding performances caught the attention of the footballing world.

On 25 August 2017, there came a turning point of his career. La Liga side Barcelona announced that they have reached an agreement with the 20 years old player. Moreover, this deal was worth €105 million, plus €40 million add ons. Moreover, after his medical, he signed a contract for five years with a buyout clause set at €400 million. Hence he became the joint-second most expansive player along with Paul Pogba. On a lighter note, Barcelona had sold Neymar for €222 million. However, his continuous injuries restrained him to play big for Barcelona. Though on 14 March 2018, he scored his first goal for Barcelona yet he could not leave a lasting impact. Till now he has scored 12 goals in 21 appearances for the club.

Is Dembele deal with Barcelone going to end?

Well, the injury-prone Dembele has come up to meet with the expectation of the club. He was rarely available to play because of his continuous injuries. Therefore, Barcelona has considered to sell him in around six months. Reportedly, the club has also opened the offers. Hence Dembele’s contract will come to an end before completing five years. 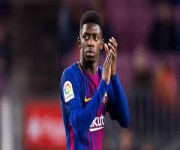 Article Name
dembele barcelona
Description
dembele barcelona deal is near to end after his lack of availability because of his continous injuries. Dembele had a wonderful entry in Footballing world
Author
Khurshid Ahmad
Publisher Name
Frantisek Juris