What about General Mcclellan?

What words can describe General Mcclellan? Who is he? He is the master of all trades. Moreover, Mcclellan is the hero of America. The original name of General is George Brinton McClellan. However, he is famous with the names of “The Young Nepolean” and “Little Mac”. Moreover, George is an all-rounder. He is a soldier, a civil engineer, President of a railroad and later in his life a politician. During the American civil war, he also served as Major General. McClellan was born on 3 December 1826 in Philadelphia, Pennsylvania, USA. He has fought in the battles of Mexican-American war, American civil war and many more. Here, I am going to tell you briefly about him, however, for more details, click here.

For what Mcclellan is known?

Mcclellan, “the young Nepolean” is famous as a great organizer and manager of the Union Army of Potomac. The men and troops who had served under his command used to like him very much. Mcclellan used to have a very frank and friendly command style. However, President Abraham Lincoln had not ever liked his style. Therefore, it put him at odds with the president. Moreover, his clash with the president also affected his military and political career.

Well, Mcclellan joined the Army at the age of just 14 when he was welcomed at United States Military Academy in 1842. Moreover, the academy waived off his age minimum age limit of 16 especially for him. Hence after training, he joined the Army Engineer Corps. However, in 1846 he received move order to take part in the Mexican war. Therefore, he arrived well prepared and well-armed but he was a bit late and could not witness American victory. During the course, he suffered from Malaria which hospitalized him for a month. Later he served as an engineering officer during the war and performed exceptionally. Because of his outstanding performance, he got a promotion to the rank of the Captain.

In 1861 when the American civil war started, Governor of Ohio called him and appointed as Major General of the militia. Later, also he became the commander of that and he formed the strategy of war. He also opposed the federal interference in the slavery and Army. As a result, he created many opposers of him.

Moreover, he well organized the Army and trained his troops in his own style and guidelines. He was very popular among his men. After a few months, he also became the General-in-chief of all the Union of Armies. He ran the campaign across all states to curb the civil war. However, after the election when Abrahan Lincoln became the new president of the USA, ha had some clashed with him. Abraham was not happy with the command style of Mcclellan. However, he could not enforce his style and Abraham removed him.

General George B Mcclellan devoted his later years to travelling and writing. He died on 22 October 1885 in New Jersey, USA at the age of 58 years. 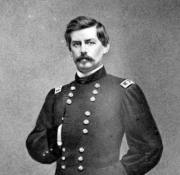 Article Name
General Mcclellan
Description
General Mcclellan was the hero of the American civil war and was general in chief of the Union Army. He was very popular among his men. he joined Army at age of 14
Author
Khurshid Ahmad
Publisher Name
Frantisek Juris