Who is Malcolm X?

Who is Malcolm X? What about Malcolm X early life? What had he done? And so many more questions may have come into your mind after reading the title. Malcolm X whose real name is El-Hajj Malik El-Shabazz was an American minister. Moreover, he was a Muslim and a human right activist. Malcolm was a prominent figure during the civil rights movement in America. Moreover, he was a vocal spokesperson of Muslim as well as Islam. He was born on 19 May 1925 in America and assassinated on 21 February 1965. Moreover, African American leader was a huge supporter of black nationals. I am going to tell you about his early life here. However, to get full details about him, visit here.

Malcolm was the fourth child of his parents Earl Little and Lousie Helen Little. His father Earl was also a local leader so he had a great impact on Malcolm to nurture his leadership abilities. Moreover, Earl was also a human right activist and was a leader of the Universal Negro Improvement Association (UNIA). Therefore, they saw a lot of hardships and difficulties. The white racist group “The Black Legion” blamed him for spreading trouble. Hence they received a lot of threats and harassment. So, they had to shift from one state to another. Finally, they Michigan. All these circumstances left affected young Malcolm very badly.

Moreover, in 1931 his father’s death in a road accident at the age of 6 created more troubles for him. His mother believed that Earl’s demise was not because of a road accident but murder. However, Malcolm was something special. He not just fought against his own difficulties but also emerged as a great leader. Seven years later, in 1938 he again faced a setback when his mother also died because of a nervous breakdown. Malcolm’s family had scattered and all children had to go in foster homes.

Malcolm Little went to West Junior High School in Lansing. After early education, he then joined Mason High School Mason in Michigan. However, Malcolm left high school before completing his graduation in 1941. After that, Malcolm did many jobs but could not excel because of his black complexion. Later he moved to New York to see better opportunities. It is also said he had indulged in many immoral activities to get money. He also got prisoned for stealing a watch. 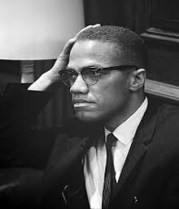