What about President Eisenhower?

President Eisenhower. Should we call him General? Or President? Or Ike and Little Ike? Well, Dwight David Eisenhower has served the USA in so many ways. Moreover, he was a five star general during World War II. Eisenhower who born on 14 October 1890 was the 34th president of America. Also, during WWII, he was the supreme commander of the Allied Expeditionary Force in Europe. His presidency lasted for 8 years from 1953 to 1961. After that John F. Kennedy succeeded him. Here, we have a look at his life, presidency and accomplishments. However, for further details, click here.

Eisenhower who born and raised in Kansas belonged to a strongly religious family. Moreover, he completed his graduation from West Point and joined the Army in 1915. Also, he married Mamie Doud after a year, in 2016. Therefore, his Army assignments kept him away from the religious activities until 1952. During WWI, he requested higher military officials to assign him duties in Europe. However, they denied him and gave him command of a unit that trains tanks crew.

Moreover, during WWI, he served under many generals and demonstrated great leadership abilities. Hence in 1941, he earned got a promotion to the rank of Brigadier. After that when America entered WWII, he supervised the invasions of North Africa and Sicily. Also, he had overseen the invasions of France in Germany. When the war ended, he served as Army Chief of Staff from 1945 to 1948 as well as president of Columbia University. Later, he also became the first Supreme Commander of NATO from 1951 to 1952.

Initially, he was against the politics. He used to say that I could not serve as Army Chief if others believed he had political ambitions. Reportedly, he kicked off some of his staff from office who had political thoughts. But in 1952, due to insistence of many, he ran a campaign for the president as a Republican. The reason for his entrance in the politics was the foreign policies of Senator Robert A. Taft. Because Taft was against NATO and wanted no foreign entanglements. However, he won the election not just in 1952 but also was re-elected in 1956.

Moreover, Eisenhower worked more on foreign policy and built strong relations across the world. However, he could not take part in elections fro 3rd tern because of a constitutional amendment in 1951. According to amendment, a person can be re-elected two times. On 28 March 1969, he died because of heart failure.

President Eisenhower had earned many awards and medals from across the world. Also, there are many institutes on his name.

To read more about such famous people, visit here. 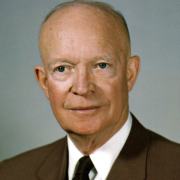