Who is Sergeant York?

Sergeant York WW1 hero is a brave soldier of the United States Army. Moreover, he was one of the most decorated soldiers during the First World War. Seargent York whose original name was Alvin Cullum York born on 13th December 1887 in Tennessee. Moreover, he is the holder of the Medal of honor after his heroic action while attacking the German Machine Gun nest. He along with his troops killed 25 soldiers and captured 132 as well as takin at least one machine gun. Moreover, he also earned many honors and decorations from allied countries also like France, Italy, and Montenegro. Here, we know briefly about the brave soldier. However, to read complete details about him, click here.

Early Life and career of York

York early was not easy, as his father used to work as a blacksmith. Thus his father was unable to send his children to school. All eleven children had no proper schooling. However, they used to work as laborers, fishermen, and hunters to assist the family. But after the death of his father, Alvin looked after his siblings and worked as a logger and construction crew. Besides working, he also used to go to church regularly and as a result, used to drank heavily.

However, in 1914, York induced in military services as World War I loomed. In the beginning, he earned the status of Conscience Objector because of his religious views. Because his religion was against the violence. However, when he had the practical experience of war his views changed. Hew joined 82nd Division as an infantry private.

Well, now I am going to tell you about the incident which earned fame for York. And as a result, he got Medal of the honor. In October 1918, when he was in France and serving as newly-promoted Corporal. The higher command assigned his 17-soldiers group to eradicate a German Machine Gun post. When American soldiers captured a number of enemy soldiers and were returning back, they got attacked. Hence German soldiers firing killed 6 American soldiers as well as the senior ranks of York’s group. Now, York was there with the highest rank among others so he took charge.

York attacked on the Machine Gun position with his rifle and killed several. He fired until he got out of ammunition. Germans attacked him but he used his pistol and killed them and also arrested their officer. Thus he returned to unit with Machine Gun as well as many prisoners. This incident no just made him a national hero but also an international celebrity.

Sergeant York WW1 hero got many awards and honors because of his heroic and brave action. He got an immediate promotion to the rank of Sergeant after the incident. Moreover, he also earned the Distinguished Service Cross Award. But later after investigations, the high command turned his award into the Medal of honor. York died on 2nd September 1964 in his hometown.

To read more about such personalities, visit here. 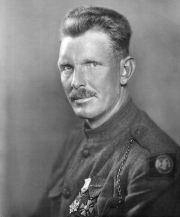